A commercial regenerated bead cellulose was suspended in water at pH 4.8, and oxidized with NaClO2 used as a primary oxidant and catalytic amounts of NaClO and 4-acetamide-2,2,6,6-tetramethylpiperidinyl-1-oxyl radical. Carboxylate groups were formed up to 1.87 mmol/g in the beads by the oxidation of C6 primary hydroxyls to carboxylates without significant weight losses or morphological changes. The spherical shapes, highly porous surface structures consisting of nano-sized fibrils, and the cellulose II crystal structure of the original beads were mostly maintained by the oxidation, indicating that the carboxylate groups formed are predominantly present on the fibril surfaces. Cation-exchange behavior of the TEMPO-oxidized cellulose beads was compared with carboxymethylated cellulose beads, showing that the former was characteristic and superior to the latter in terms of adsorption of metal ions and cationic polymers. Especially, the TEMPO-oxidized cellulose beads had high adsorption behavior of lead ion and high-molecular-weight cationic polymers. 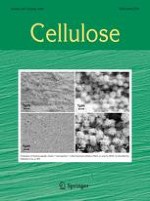