Cellulose nanocrystals (CNCs) were first submitted to periodate oxidation for increasing reaction times and subsequently to reductive amination with water-soluble amine-terminated polymers. The morphology and chemical properties of the samples were characterized by imaging (TEM), spectroscopic (FTIR and 13C solid-state NMR), and scattering techniques (DLS and WAXS). The data revealed that the periodate oxidation of CNCs resulted in an increase in the degree of oxidation (DO) with reaction time and that most of the created carbonyls were converted into hemiacetals as a result of their interaction with vicinal hydroxyl groups. Like in the case of cellulose microfibrils, CNCs were oxidized from the surface to the core of the particles. For low reaction times and concomitant low DOs, the morphology and crystallinity of the CNCs were mildly altered. A prolonged oxidation resulted in the separation of the originally laterally assembled crystallites and the data are consistent with the presence of dangling chains resulting from the cleavage of glucosyl units at the surface of the thin elongated cellulose nanoparticles. A comparison with literature data further showed that the oxidation reaction was not primarily governed by the degree of crystallinity. Remarkably, after reductive amination with water-soluble polymer chains, thin unoxidized crystalline cellulose nanoparticles were recovered. This situation seems to result from the surface peeling of the CNCs due to reaction of surface-oxidized dangling chains with water-soluble polymers and their subsequent solubilization. 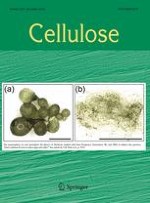