The local structure on the surface of plate-like cellulose II oligomer crystals (CIIOCs) was investigated by NMR spectroscopy. CIIOCs with reducing ends that were selectively labeled with 13C were enzymatically synthesized using cellodextrin phosphorylase. The solid-state 13C cross polarization/magic angle spinning spectra of the 13C-labeled CIIOCs clearly exhibited two resonance peaks (labeled as C1Rα and C1Rβ) derived from the C1 atoms of the reducing ends. The 2D 13C double quantum/13C single quantum homonuclear correlation spectrum indicated that two magnetically nonequivalent glucopyranose rings (Rα and Rβ units) coexisted at the reducing end units. The 1H/13C heteronuclear correlation spectrum suggested that there was a large difference between the local environments around the anomeric carbons of Rα and Rβ units. The abundance ratio of C1Rβ to C1Rα in the solid state was 4:1, whereas that of C1α and C1β in solution was 1:1. When the oligomer chains are packed in the cellulose II crystal, the reducing end units located on the surface of the plate-like crystal may tend to have β-anomeric structure, which would be more sterically stable than the α-anomeric structure. 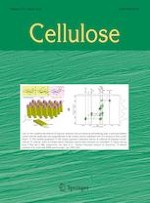