Diffusion bonding is a process by which two flat, usually metallic, surfaces are welded together at a high temperature and moderate pressure. Bonding occurs due to a combination of diffusion and power law creep that close the voids formed by microscopic differences between the mating surfaces. While the different process parameters are well understood the effects of surface condition and void shapes during bonding has not been thoroughly researched. In this paper we use measured surface profiles, discretize them, and apply the diffusion and creep equations numerically to the profiles in order to provide insight into the effects of surface geometry on bonding. Using this method the voids can interact with each other and the effects of nearby voids can be computed. Experimental tests are performed to confirm the model and theoretical tests were created to determine what the effects of different surface geometries are on bonding performance. While in most cases the bonding was dominated by power law creep the most optimal void shape was one where the voids had completed the creep stage and were controlled by diffusive processes. It was also found that concentrating the overlap area also increases bonding performance. 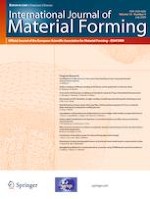