Supramolecular hydrogels (SMGel) have attracted much attention as a drug and gene delivery system in recent years. In this study, SMGels based on the tri-block copolymer of poly-ε-caprolactone–polyethylene glycol–poly-ε-caprolactone (PCL–PEG–PCL) and α-cyclodextrin (α-CD) were prepared and evaluated for the delivery of two model drugs, naltrexone hydrochloride and vitamin B12. Tri-block copolymers were synthesized easily in 15 min by ring-opening polymerization using the microwave irradiation technique, and their structures were determined by gel permeation chromatography and nuclear magnetic resonance methods. SMGels composed of various concentrations of the copolymer and α-CD were prepared and characterized for their rheological behaviour, their gel formation time and in vitro drug release profile. The results indicated that copolymers with a PCL to PEG ratio of 1:4 are suitable for SMGel preparation. The most viscose system with good syringeability was prepared by mixing 12 % wt α-CD and 10 % wt of copolymer. The gelation was found to occur within a minute after mixing. The viscosity of the hydrogel systems was determined as a function of shear rate. Finally, in vitro B12 release through the hydrogel systems was studied. Up to 80 % of Vitamin B12 was released through this system during a period of 20 days. Rheological evaluation revealed that the hydrogel has shear thinning properties, and the system regained its ground rheological state in a time dependent manner. Polymer concentration did not affect the drug release profiles. Finally, it was concluded that such systems are appropriate drug delivery systems due to their ability to provide a controlled drug release profile and their shear thinning thixotropic behaviour, which makes them syringeable and injectable. 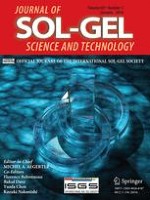 Synthesis of TiO2–SiO2 aerogel via ambient pressure drying: effects of sol pre-modification on the microstructure and pore characteristics

Physical and electrochemical properties of (La0.3Sr0.7)0.93TiO3–δ synthesized by Pechini method as an anode material for solid oxide fuel cells