Metal additives usually have a catalytic effect on non-graphitic carbon materials. However, graphitic carbon materials are difficult to catalyze owing to carbon atoms whose neighbors are ordered regions and less cross-linked. Artificial graphite is generally prepared from coke and pitch, both of which are graphitic carbon. Therefore, efficient catalysts for graphitic carbon materials are important for industrial technology. The effect of light rare earth elements (La, Ce, and Pr) and other additives (Ti, Ni, and B) as co-catalysts in artificial graphite development was investigated. Compared with the single catalysts, the combinatorial catalysts more significantly improved the degree of graphitization in the carbon materials, indicating synergistic catalytic effects. Both dissolution–precipitation and formation–decomposition of carbide were involved in the synergistic catalytic mechanisms. In the combinatorial catalysts systems, the light rare earth element would accelerate the graphitization process of carbon materials by widening the range of the catalytic temperature, accelerating the speed of oversaturation of dissolution, or generating a new carbide phase with the other catalyst. This would promote formation of the more-ordered graphitic structure at relatively low temperature. For instance, to attain the same degree of graphitization and better crystalline sizes at the same residence time, the carbon materials with combinatorial catalysts can be heat treated at temperatures 400 °C lower than without catalysts, and the electrical and mechanical properties are enhanced. 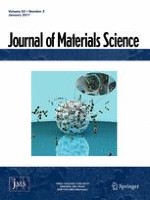 Gold nanoparticle within the polymer chain, a multi-functional composite material, for the electrochemical detection of dopamine and the hydrogen atom-mediated reduction of Rhodamine-B, a mechanistic approach

Influence of TiO2 agglomerate and aggregate sizes on photocatalytic activity