» Jetzt Zugang zum Volltext erhalten
Wichtige Hinweise
Communicated by: David Lo and Alexander Serebrenik
Dror Feitelson holds the Berthold Badler chair in Computer Science. This research was supported by the ISRAEL SCIENCE FOUNDATION (grant no. 407/13). This paper is an invited extended version of a paper from ICPC 2017.

Program comprehension concerns the ability to understand code written by others. But not all code is the same. We use an experimental platform fashioned as an online game-like environment to measure how quickly and accurately 220 professional programmers can interpret code snippets with similar functionality but different structures; snippets that take longer to understand or produce more errors are considered harder. The results indicate, inter alia, that for loops are significantly harder than if s, that some but not all negations make a predicate harder, and that loops counting down are slightly harder than loops counting up. This demonstrates how the effect of syntactic structures, different ways to express predicates, and the use of known idioms can be measured empirically, and that syntactic structures are not necessarily the most important factor. We also found that the metrics of time to understanding and errors made are not necessarily equivalent. Thus loops counting down took slightly longer, but loops with unusual bounds caused many more errors. By amassing many more empirical results like these it may be possible to derive better code complexity metrics than we have today, and also to better appreciate their limitations. 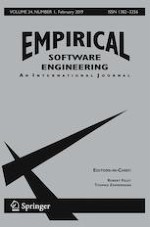 Identification and prioritization of SLR search tool requirements: an SLR and a survey

Introduction to the special issue on software analysis, evolution, and reengineering

Software engineering in start-up companies: An analysis of 88 experience reports

Alleviating patch overfitting with automatic test generation: a study of feasibility and effectiveness for the Nopol repair system