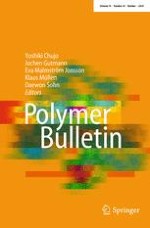 The use of rye, oat and triticale straw as fillers of natural rubber composites

Research for waterborne polyurethane/composites with heat transfer performance: a review