In this work, nanocomposites (Ncs) from Pd nanoparticles and TiO2 (Pd-Nps-TiO2) were supported on a polystyrene matrix (PS). Chemical liquid deposition, solvated metal atom dispersion and in situ polymerization were used in order to synthesize these Ncs. Colloid and nanocomposite characterization were performed by TEM, SEM, EDX, SAED and TGA. TEM analysis revealed a particle size of 7 nm for Coll-Styrene and 11 nm for Pd-Nps supported on TiO2 after radical polymerization. SAED showed phases corresponding to both metallic Pd and TiO2 anatase in the polymeric matrix. Molecular weight (MW) was determined by viscosimetric method. MW varies according to the initiator concentration and nanoparticle amount used for polymerization. The amount of nanoparticles increased the decomposition temperature of the Ncs by 10 °C, improving the thermal stability of these hybrid materials. Photoacoustic properties were evaluated in order to determine the effect of nanoparticles on thermal diffusivity (α) inside the matrix. Significant values of (α) were found for Ncs with Pd-Nps in contrast to PS and Pd/TiO2 Ncs. Structural aspects and colloidal aggregation of Ncs were also studied. 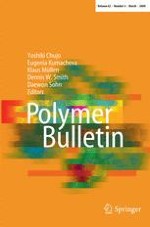 Grafting of polystyrene “from” and “through” surface modified titania nanoparticles