To eliminate formaldehyde in melamine–formaldehyde (MF) resins the nonvolatile and nontoxic aldehyde glyoxal (G) was reacted with melamine to prepare novel melamine–glyoxal (MG) resins. These MG resins were synthesized with different M/G molar ratios, and their properties were tested. The liquid and hardened MG resins were characterized, and the oligomers formed and their distribution were determined by 13C NMR and matrix assisted laser desorption ionization time of flight mass spectrometry (MALDI-TOF-MS). The energy of activation of cross-linking of the MG resins was found to be higher than for MF resins. This rendered some applications possible, such as MG resins impregnated paper surface overlays and showed such resins limitations as binders for wood particleboard. The MG resins remained stable at ambient temperature for more than 12 days. 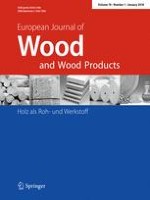