Raw magnesite is found in most deposits along with limestone, dolomite, ferruginous minerals, quartz and other silicates. The most important quality criteria for magnesite concentrates are the contents of MgO, CaO, SiO 2 and for some applications also Fe 2O 3. These components lower the melting point, which negatively affects the processing of the magnesite concentrate. In the coarse fractions the concentration of magnesite is often achieved by utilising selective extraction and crushing, manual and sensor-based sorting, density sorting and dry magnetic separation. For achieving a separation effect in the fractions smaller than one millimetre wet processing technologies such as wet magnetic separation and flotation are applied. Especially for the fraction smaller than 200 µm flotation is to some extend irreplaceable.
Due to natural breakage characteristics of crude ores fractions smaller than 200 µm will always be resulting from mining, crushing and milling activities. Dumping those fractions contradicts economic pressure nowadays. The maximization of recovery of minerals in the mined ore is necessary for a successful mining operation. The responsibility towards future generations of the minimization of wasting natural resources leads to the same direction.
Anzeige
Nevertheless, a sustainable and future-orientated usage of a deposit makes the processing of the fractions smaller than 200 µm necessary. Due to the increasing demand for high-grade concentrates, the importance of a separation technology for fractions smaller than 200 µm will increase in the future. In situations and areas where access to water for processing is limited or not available, a water-free processing technology will be an essential alternative [ 1, 2].
The company “Styromag Steirische Magnesitindustrie GmbH” provided the raw magnesite for the separation tests. The philosophy of this company is strongly geared to sustainability and pursues the goal of sensible and sustainable use of natural resources. This corporate policy and readiness for sustainable raw material production offers an optimal basis for carrying out joint research in the field of dry mineral processing [ 3].

3 Characterization of the Raw Magnesite Sample

To obtain a first impression of the raw magnesite sample, the chemical composition and a particle size distribution were determined. The results of the chemical analysis are summarised in Table  1, the particle size distribution in the logarithmic grid is shown in Fig.  2. According to supplier information, the sample consists of the minerals magnesite, calcite, dolomite, quartz and talc.
TABLE 1
Chemical composition of the raw magnesite sample
×

The separation tests were carried out at the “ST X2” triboelectrostatic belt separator. The operational principle has already been shown in Fig.  1. The feed sample passes from above via a vibrating unit into the electrostatic field, which is generated via electrodes arranged one above the other. In the gap between the electrodes a belt, which is basically a large mesh, is running towards itself in a continuous loop. The belt takes care of intensive feed material charging. The charged particles are dragged to the electrodes with the opposite polarisation and are then transported by the belt in the respective direction. The polarity of the electrodes can be reversed on both sides. Product discharge takes place on the left and right side of the machine after leaving the electrostatic field. The two products are collected in bags [ 8].

4.3 Machine Settings for the Separation of Raw Magnesite

The triboelectrostatic belt separator enables the variation of numerous parameters. In order to gain knowledge about the influence of these parameters on the separation efficiency of the raw magnesite sample, these and their interactions with each other were analysed in detail. For the execution of the separation tests, a fractional factorial test design of type “2 5‑1” was chosen [ 8, 9]. The separation success was assessed by determining the chemical composition by means of XRF in combination with the acid insoluble residue and the loss on ignition.
For the determination of the machine settings for the separation of raw magnesite the following machine parameters were changed on the lab scale belt separator: [ 8]
a)
applied voltage
b)
electrode distance
c)
belt speed
d)
polarity of the top electrode
e)
feed rate
Ad a) The voltage applied to the electrodes can be infinitely adjusted from 0 to 6 kV. For the tests, the levels for the applied voltage were set at 3 and 6 kV [ 8].
Ad b) The electrode distance is limited by the geometric conditions. For the maximum distance a value of 14 mm was determined, for the minimum it was 9 mm. These two extremes were taken as a level in the experimental design plan [ 8].
Ad c) A belt speed of 35.2 fps (10.9 m/s) was defined as the upper level in the design plan. For the lower level 17 fps (5.2 m/s) was selected [ 8].
Ad d) The polarity of the top and bottom electrode can be set positive or negative. For the generation of an electrostatic field, one electrode must always be positive and one negative. For the experiments, both variants were implemented. Further information on the polarity always refers to the head electrode [ 8].
Ad e) The feed rate of the vibro feeder can be adjusted from 1 to 10. The values 5 (about 120 g/min) and 10 (about 250 g/min) were defined as levels [ 8].
The levels of the parameters a) to e) given here were taken over into a fractional factorial test design of the type “2 5‑1” which is illustrated in Table  2.
TABLE 2
Partial factorial test plan of type “2 5‑1”
During the execution of the tests, the machine settings were changed as previously defined in the design plan in Table  2. The environmental influences of the system were kept constant as far as possible. The room temperature during all tests was about 25 °C, the relative humidity about 30%.

The assessment of the machine settings for the separation of raw magnesite was carried out by the average values of the MgCO 3 grade and recovery in the concentrate at the 16 different setting combinations (according to Table  2).
The average values were calculated from the results obtained at the different levels, from the two mean values at setting (maximum) and (minimum) the difference between these two values was also formed, which describes the intensity of the influence of the factor [ 8].
The effect diagram for the applied test program (Fig.  3) indicates the influence of the factors on the separation result. Electrode distance, belt speed and feed rate had a big influence on the separation result. Increasing the level resulted in increasing MgCO 3 recovery. Increasing applied voltage increased the MgCO 3 recovery as well, but the impact on the separation result was quite low. A negatively charged top electrode resulted in a higher MgCO 3 recovery than a positively charged top electrode.
×
The balance sheet of the most successful separation test is shown in Table  3. The MgCO 3 grade was increased from 76.5% in the feed to 87.9% in the concentrate with a yield of 78.9%. 90.7% of the MgCO 3 was reported to the concentrate, just 9.3% of the MgCO 3 was lost to the tailings product.
TABLE 3
Balance sheet of the most successful separation test
Fig.  4 presents a comparison of the recoveries of MgCO 3 versus CaCO 3 in the products. The recoveries of MgCO 3 and CaCO 3 correlate to a greater extent. The fact that there are no intergrown particles to be expected in the test feed proves that magnesite, dolomite and calcite were transported to the same product. There was not one single test resulting in magnesite, dolomite and calcite being recovered in different products.
×
The position of the minerals in the triboelectric series also defines this trend [ 10].
The associated machine settings for the separation of raw magnesite are summarised in Table  4.
TABLE 4
Machine settings for the separation of raw magnesite

In course of the presented study the sortability of raw magnesite with the “ST X2” triboelectrostatic belt separator was confirmed. For an efficient separation, the optimum machine parameters for this raw material (Table  4) must be set.
The presented separation test series showed an impressive separation performance between carbonates and silicates. High mass and MgCO 3 recovery in the concentrate combined with a significant increase of the MgCO 3 grade in the concentrate prove the applicability of the technology for the tested raw material.
The comparison of the recoveries of MgCO 3 and CaCO 3 indicate that the carbonates in the feed sample resulted in the same separation behaviour. A separation effect regarding the containing carbonates was not achieved. All tests resulted in a concentrate consisting of a mixture of the carbonates.
Open Access This article is licensed under a Creative Commons Attribution 4.0 International License, which permits use, sharing, adaptation, distribution and reproduction in any medium or format, as long as you give appropriate credit to the original author(s) and the source, provide a link to the Creative Commons licence, and indicate if changes were made. The images or other third party material in this article are included in the article’s Creative Commons licence, unless indicated otherwise in a credit line to the material. If material is not included in the article’s Creative Commons licence and your intended use is not permitted by statutory regulation or exceeds the permitted use, you will need to obtain permission directly from the copyright holder. To view a copy of this licence, visit http://​creativecommons.​org/​licenses/​by/​4.​0/​. 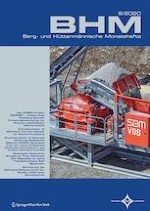