Big data analytics proved to be one of the most influential forces in today’s competitive business environments due to its ability to generate new insights by processing a large volume and variety of data. Storing as well as mining these datasets is one of the primary challenges of the big data era. If data are stored in a well-defined pattern, then its updation mining and deletion processes become easy. In this paper, granular computing concept is used to store heterogeneous data in the format of tensor. A multi-dimensional matrix, also known as tensor, stores data in the raw format, and then, raw tensor is replicated to multiple tensors of different abstraction levels based on concept hierarchy of each attribute. Mathematical foundation of tensor formation and query processing are developed. The proposed method is successful in creating tensors of a diabetes dataset proving its applicability. The proposed system provides faster computation, low response time, better privacy and high relevancy as compared to baseline PARAFAC2 and CANDELINC tensor analysis method when run on Microsoft Azure cloud infrastructure. Different levels of information granules in the form of tensors make data storage and its query processing effective. 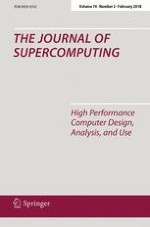 DSLM: a decentralized search for large and mobile networks

Special section: towards high performance computing in the cloud