This study attempts to explore the effects of interactive whiteboard (IWB) technology use on students’ achievement and perceptions in Turkish as a foreign language instructional context. The participants included 19 Nigerian Turkish Language learners who were all fluent in three languages: English, Hausa, and their tribal languages. They had been learning Turkish for the last four months when they began the study using an IWB in their Turkish writing classes. For the 14-week study, participants were exposed to the IWB instruction for six hours per week. Overall implementation took place in a Turkish Language Learning Research Center in a state university in Turkey. We have collected the data via the Interactive Whiteboard Survey for University Students, achievement tests as well as semi-structured interviews with students to support quantitative data after the implementation T-tests and descriptive statistics were used for the analysis of the survey and content analysis for the interview data by using, QSR Nvivo 8.0, a qualitative data analysis tool. Results revealed that participants developed positive attitudes towards the IWB use and were satisfied with the contributions of IWB use in their language classes such as writing and grammar. 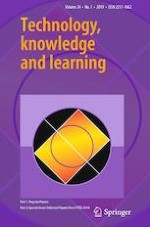 How Novices Use Expert Case Libraries for Problem Solving

Cyberloafing in Higher Education: Reasons and Suggestions from Students’ Perspectives

Dropping Out or Dropping In? A Connectivist Approach to Understanding Participants’ Strategies in an e-Learning MOOC Pilot