Despite the release of about 1.9 million individuals of Pareuchaetes insulata (Walker) (Lepidoptera: Erebidae) in KwaZulu-Natal for the biological control of Chromolaena odorata (L.) King and Robinson (Asteraceae) in South Africa, the moth probably only established at one of the 30 release sites and its population level is generally low in the field. To determine whether climate incompatibility in South Africa is responsible for the poor performance of P. insulata, the effects of temperature on life-history traits were investigated under several constant temperatures. Although a degree-day model estimated between 3.9 and 10.0 generations of the moth per year in the weed’s invaded range, survival and fecundity declined while development time was prolonged at constant temperatures below 25 °C, indicating that both direct and indirect negative impacts of low winter temperatures, such as increased mortality, slow development and reduced fecundity as well as exposure to natural enemies, may partly explain the poor performance of P. insulata in South Africa. 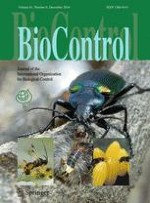