In a weighted spatial network, as specified by an exchange matrix, the variances of the spatial values are inversely proportional to the size of the regions. Spatial values are no more exchangeable under independence, thus weakening the rationale for ordinary permutation and bootstrap tests of spatial autocorrelation. We propose an alternative permutation test for spatial autocorrelation, based upon exchangeable spatial modes, constructed as linear orthogonal combinations of spatial values. The coefficients obtain as eigenvectors of the standardized exchange matrix appearing in spectral clustering and generalize to the weighted case the concept of spatial filtering for connectivity matrices. Also, two proposals aimed at transforming an accessibility matrix into an exchange matrix with a priori fixed margins are presented. Two examples (inter-regional migratory flows and binary adjacency networks) illustrate the formalism, rooted in the theory of spectral decomposition for reversible Markov chains. 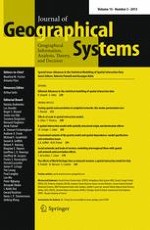 The effects of World Heritage Sites on domestic tourism: a spatial interaction model for Italy

Editorial: Advances in the statistical modelling of spatial interaction data