The experimental characterisation of electrospun poly(lactic acid) (PLA):poly(ε-caprolactone) (PCL) as drug carriers, at five blend ratios from 1:0, 3:1, 1:1, 1:3 and 0:1, was holistically investigated in terms of their morphological structures, crystallinity levels and thermal properties. A widely used antibiotic tetracycline hydrochloride (TCH) was loaded to prepared fibrous mats at TCH concentrations of 1 and 5 wt%. The additional TCH into PLA:PCL better facilitates the reduction of fibre diameter than polymer blends. Increasing the TCH concentration from 1 to 5 wt% was found to result in only a modest decrease in the crystallinity level, but a significant increase in the crystallisation temperature (T c) for PLA within PLA:PCL blends. The infrared spectra of fibre mats confirm the successful TCH encapsulation into fibrous networks. The first order and Zeng models for drug release kinetics were in better agreement with experimental release data, indicating the release acceleration of TCH with increasing its concentration. In a typical case of PLA:PCL (1:1) loaded with 5 wt% TCH, the fibre mats apparently demonstrate more wrinkled and floppy structures and increased fibre diameters and decreased inter-fibrous spaces after 7-day in vitro fibre degradation, as opposed to those obtained after 3-h degradation. 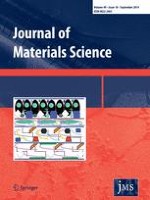