The texture evolution and fatigue crack propagation (FCP) of 2000 series alloys were investigated, respectively, by using scanning electron microscopy and x-ray diffraction. Results showed that the intensity change in different textures (such as Goss, Copper, S and Brass) abides by a linear evolution law, and a new model for texture evolution is proposed to predict the texture intensity during different heat treatments. With increasing annealing temperature, the FCP rate increased, but the damage tolerance decreased. The intensity of P texture was the key to affecting FCP rate and damage tolerance of the alloys. A new model based on the average grain diameter and P texture volume fraction was proposed to predict FCP rate and damage tolerance, and the predicted FCP rates agree very well with the experimental FCP rates of the alloys after different T83 treatments. 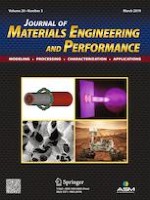 Structure and Mechanical Properties of Steel in the Process “Pressing–Drawing”