Individual sea turtle nests have an extremely low probability of producting adult turtles; thus the practice of moving nests away from the ocean (where they will not be inundated by seawater) is a questionable conservation strategy. Recently in Environmental Management, Mrosovosky used the repeatability of nesting female turtles to place their eggs in certain locations to infer that some females may consistently nest in areas which will be flooded, lowering the chance that any eggs will hatch. This information was used to hypothesize that saving “doomed” sea turtle nests may then alter the genetic composition of the population, ultimately resulting in turtles that nest in poor habitats. Here I question Mrosovosky’s argument by focusing on several weaknesses inherent in the original article, namely that at present there is no evidence to suggest that nest-site selection is a heritable trait with an underlying genetic basis.

Titel
The Benefits of Nest Relocation Extend Far Beyond Recruitment: A Rejoinder to Mrosovsky
Autor:
David A. Pike 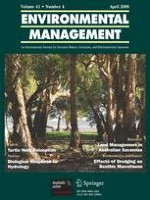 A Typology of Collaboration Efforts in Environmental Management

Crowding and Experience-Use History: A Study of the Moderating Effect of Place Attachment Among Water-Based Recreationists

The Impacts of Human Visitation on Mussel Bed Communities Along the California Coast: Are Regulatory Marine Reserves Effective in Protecting These Communities?