The new Chinese leadership promised to deliver a ‘Chinese Dream’ with the rejuvenation and the prosperity of the Chinese nation and the happiness of the people as China’s development goals. While articulating the necessity of the further reform and opening-up, they also put an emphasis on the adherence to a ‘socialist way of Chinese characteristics’ in that the party leadership is regarded as its imperative. For the ‘Chinese Dream’ to be realized, a set of values were proclaimed, including prosperity, democracy, civility, harmony, freedom, equality, justice, rule of law, patriotism, dedication, integrity and friendship. Beside the existing institutions such as the system of democratic centralism, the CCP-led multi-party cooperation and system of people’s congresses, a set of new institutions were proclaimed as well, including a brand new ‘socialist’ system of rule of law and modern state governance system. This paper provides updated information and analysis of these newly proclaimed values and institutions, which serve an important new foundation for China to gain high economic efficiency, sustainable productivity, and escape from a ‘middle-income trap’, and support the endeavor to realize the ‘Chinese Dream’. However, its realization depends on whether the new leadership can successfully enforce a competitive market order and the rule of law in the years to come. 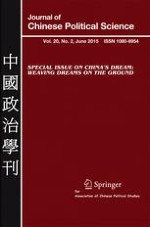 Jiang Qing, edited by Daniel A. Bell & Ruiping Fan: A Confucian Constitutional Order: How China’s Ancient Past Can Shape Its Political Future

Carl Dahlman, The World Under Pressure: How China and India Are Influencing the Global Economy and Environment