The Rhododendron of China exhibit great diversity, however no conservation evaluation of the genus had been performed, as a result of no governmental financial support. Based on our recent field investigations covering a total of seven provinces and 95 days from 2011 to 2013 in China, we herein provide an updated conservation status on eight species plus two further species that are listed as endangered and vulnerable in the Red List of Rhododendrons in which the evaluation was mainly based on old records. Our surveys indicated that urgent conservation actions to the two critically endangered species R. magniflorum (less than 10 extant plants) and R. roxieoides (only 22 mature individuals) should be performed. Moreover, we proposed that species represented by few plants, and that grow at low altitude, in disturbed habitats, should be given priority for ex- and in-situ conservation. Despite current distributions of all listed endangered Rhododendrons were not fully covered, our report aimed to arouse conservation attention and actions on Rhododendrons preferably by governmental financial support in China. 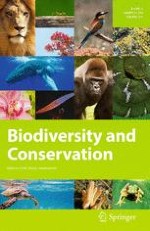 Acacia trees on the cultural landscapes of the Red Sea Hills

A framework for assessing the vulnerability of species to climate change: a case study of the Australian elapid snakes