The Critical Masses: The Rise of Contemporary Populism and Its Relation to Solidarity, Systems, and Lifeworlds | springerprofessional.de Skip to main content
SUCHE MENÜ 1 2 3 4

This paper examines the contemporary spread of populism across the globe. We argue that populist movements worldwide are responses to the colonization of lifeworlds by increasingly opaque knowledge and regulatory systems. The complexity of the systems that regulate and control the day-to-day life of individuals from afar makes these systems alien and incomprehensible, and consequently perceived as illogical and oppressive. To regain a sense of autonomy, actors have reasserted a way of thinking and acting contrary to the organic web of global interdependence, seeking independence from communities outside the known lifeworld via revitalized community control and an emphasis upon qualities resembling mechanical solidarity. We evidence this claim by comparing two contemporary phenomena which seem to be distinct events until interpreted in this way: movements against international humanitarian law and the French Gilets Jaunes. We conclude by discussing the implications for those interested in contemporary populist events in the USA and abroad and the role of scientists in communicating our findings.
Anzeige

Vorheriger Artikel Pathways to Anti-Liberalism: A Report on NatCon2, Orlando, 2021
Nächster Artikel Community Building and Exclusion: The Role of Food in University Hostels in New Delhi 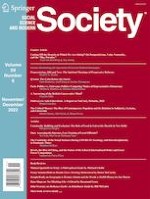 A Narrowing of the British Conservative Mind?

Gary Gerstle, The Rise and Fall of the Neoliberal Order: America and the World in the Free Market Era

Once Accessing the Internet, Less Trusting of Local Officials?

Cutting Off the Branch on Which We Are Sitting? On Postpositivism, Value Neutrality, and the “Bias Paradox”