Good background data are an important requirement in LCA. Practitioners generally make use of LCI databases for such data, and the ecoinvent database is the largest transparent unit-process LCI database worldwide. Since its first release in 2003, it has been continuously updated, and version 3 was published in 2013. The release of version 3 introduced several significant methodological and technological improvements, besides a large number of new and updated datasets. The aim was to expand the content of the database, set the foundation for a truly global database, support regionalized LCIA, offer multiple system models, allow for easier integration of data from different regions, and reduce maintenance efforts. This article describes the methodological developments.

Modeling choices and raw data were separated in version 3, which enables the application of different sets of modeling choices, or system models, to the same raw data with little effort. This includes one system model for Consequential LCA. Flow properties were added to all exchanges in the database, giving more information on the inventory and allowing a fast calculation of mass and other balances. With version 3.1, the database is generally water-balanced, and water use and consumption can be determined. Consumption mixes called market datasets were consistently added to the database, and global background data was added, often as an extrapolation from regional data.

In combination with hundreds of new unit processes from regions outside Europe, these changes lead to an improved modeling of global supply chains, and a more realistic distribution of impacts in regionalized LCIA. The new mixes also facilitate further regionalization due to the availability of background data for all regions.

With version 3, the ecoinvent database substantially expands the goals and scopes of LCA studies it can support. The new system models allow new, different studies to be performed. Global supply chains and market datasets significantly increase the relevance of the database outside of Europe, and regionalized LCA is supported by the data. Datasets are more transparent, include more information, and support, e.g., water balances. The developments also support easier collaboration with other database initiatives, as demonstrated by a first successful collaboration with a data project in Québec. Version 3 has set the foundation for expanding ecoinvent from a mostly regional into a truly global database and offers many new insights beyond the thousands of new and updated datasets it also introduced. 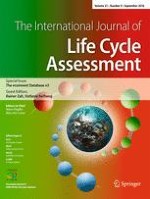 Empirically based uncertainty factors for the pedigree matrix in ecoinvent

What is new at the data front?