The ecological and economic aspects of a low emission limitation: a case study for Poland | springerprofessional.de Skip to main content
TOOLBAR 1 2 3 4
SUCHE MENÜ 1 2 3 4

A large part of single-family houses in Poland is equipped with boilers with low energy efficiency. The boilers used to heat are mainly fired with solid fuels, which are in general of low quality. A separate, often practiced procedure especially in smaller towns is burning municipal waste in boilers, such as plastics, textiles, rubber, etc., which is not only forbidden, but also constitutes a threat to human health and life (Beccali et al. 2013). On 9 December 2009, the Ministry of the Environment in Poland published a letter from the Deputy Director of the Department of Waste Management on the ban on waste incineration in furnaces in households (Ministry of the Environment 2014).
The incineration of waste in domestic boilers is usually associated with generating a significant amount of dust and gas contamination, among others, CO, CO 2, SO 2, NO x, PAHs (polycyclic aromatic hydrocarbons), dioxins, furans, as well as dusts and heavy metals.
Anzeige
Low emission is the pollution of the atmosphere, related primarily to generating thermal energy for the needs of individual households. Low emission is conventionally the emission from the chimneys of no more than 40 m. The authors of the manuscript use the term “low emission” due to the terminology adopted in Poland, where according to ERO (Energy Regulatory 2014) it is the emission of air pollutants from the sources of low height above the ground, such as roads and intersections, landfills and home hearth, or municipal emission. Unfortunately, the so-called low emission is not subject to any legal regulations; although the share of individual heating and small industrial and municipal boilers is estimated at the rate of 20–30 %, the aspect of the modernization of distributed individual heat sources becomes very important (Zastrzeżyńska and Gołębiowska 2012).
The problem of the air quality improvement, with a particular attention to minimizing the environmental impact of so-called low emission, is not the problem of only the lack of ecological and health-oriented education of the society, but first of all, the problem of a system as well as an economic nature. Some communes have begun to perceive and solve the system problem of low emission (Sadorsky 2014). In communes, numerous low emission reduction programs have appeared that aim primarily at ecological education, the statement of the needs and expectations of residents, as well as showing the sources for financing thermal modernization. Poland’s first “low emission” restriction program took place in 1995 in Silesia. This program contributed to the intensive development of the research on the improvement of burning techniques and the construction of low-power coal-fired boilers.

2 The scope of the environmental assessment

3 The results of the environmental assessment with LCA

Evaluating the data and results of the analysis (Table  2), it is possible to conclude that the parameters of the coal boiler, which is recommended for modernization, are the worst among the analysed examples except the aspect related to the cost of fuel, and the total costs of the operation at the same time and to the fact that this solution is characterized by the lowest costs of the boiler purchase (about 600 euros). The highest total cost of the operation is attributed to the oil boiler (about 4150 euros) and gas boiler (1470 euros); hence, the values in verse 8 of the Table  2 respectively to the heat source are negative. The highest operational savings are generated by biomass boilers (223 euros) that are less popular among the users of single-family houses. Another installation that provides savings associated with the operation is the heat pump, which provides savings of 134 euros and a retort coal boiler with a feeder and with a solar collector (130 euros). It is necessary to point out that in order to determine fuel costs, the averaged value of the price was assumed and the fact that the price of a new boiler installation was not included in the calculation. It is the result of the fact that there are substantial differences in the prices of particular installations. Thus, except the low current expenditure related to the use of e.g. the heat pump, it is necessary to take into consideration the costs connected with the purchase of the heating system. Table  2 shows, after the “Low emission reduction program for Łaziska Górne Commune”, that the production of thermal energy from biomass-fired boiler does not generate CO 2 emission into the atmosphere. It is true only when the balance of this gas is included in the final effect of the growth of the plant that produces a pellet (Stolarski et al. 2013; Glembin et al. 2012). The balance assumes that this amount of CO 2 gas, which is absorbed from the atmosphere at the time of the plant growth (photosynthesis) will be emitted to it when the fuel is burnt with the use of energy.
Table 2
The operating parameters and emission analysed heat sources
A lack of the emission into the atmosphere was shown in the analysis of the heat pump as one of the analysed options. The value of the environmental impact is not included in the size of “low emission” electricity used to generate heat in the heat pump is produced in power plants (elsewhere), so emissions are included in the emissions of the industrial power. It is necessary to notice that it is due to the fact that electric energy consumed to generate heat is not produced on site and it is not defined as so-called low emission. A discharge of the emission into the atmosphere takes place in the surrounding of the place of electric energy generation that is in the power plant, which was included in LCA analysis. A high value of LCA analysis (456 Pt) of this case is associated with the production of electric energy from the combustion of solid fuel and with the losses occurring during the transmission of electric energy to the recipient. It is one of the most expensive solutions for the investor when it comes to the purchase of the installation for producing thermal energy (about 4760 euros).
Table  2 presents the operating and emission parameters of eight analysed heat sources along with the results of the life cycle assessment. A “grey” column (no. 2) corresponds to the example that is most commonly met in old individual heat sources in Łaziska Górne.
High costs of the purchase, except for the most expensive heat pump, are characteristic for two next solutions among the analysed options, that is a gas and coal boiler with the use of a solar collector to generate thermal energy. It is an appropriate environmentally friendly solution; however, a low interest of the users in solar collectors is mainly due to the high price of purchase (Glembin et al. 2012).
The replacement of a low-efficient heat source in the municipal economy is the most energetically effective undertaking. It should be emphasized that the replacement of the inefficient boiler provides the greatest ecological effect in relation to investment costs. The use of a more efficient device causes the reduction of the consumption of energy resources (Dzikuć 2013a; Wanga et al. 2011). Moreover, this reduction can compensate for the increase of heating costs associated with the replacement of the resource energetically cheaper (coal) used to heat buildings for a more expensive energy carrier (natural gas). The most significant criteria of a boiler selection are the criterion of the energetic efficiency and the ecological criterion.
As part of the quantitative analysis of the uncertainty associated with the forecasts of using fuels for heating single-family houses, scenario analysis tools were used—in addition to a stagnant scenario, an optimal scenario and the use of gas preference scenario were constructed.
If assumed that the commune implements scenario no. 1 optimal, about 255,248 Pt less air pollutants would go to the environment, in comparison to scenario no. 3 stagnant (Tables  4 and 8).
In the analysed commune, the average time of using central heating boiler is about 18 years. From a technical, economic and ecological point of view, the duration of use of the boiler should be no longer than 10 years.
The above analysis covers a period of 1 year due to two aspects. The first is the variability of the number of buildings in time and the (the second aspect) thermal modernization of the existing building substance. The time interval of 1 year is also a universal interval; it is possible to make calculations in different time configurations. The studied period of time also allows for the expansion of the considered scale, for example to the area of the country or region, of course, taking the appropriate number of buildings into account. 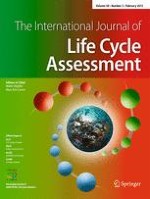 On the scientific justification of the use of working hours, child labour and property rights in social life cycle assessment: three topical reviews

LCA FOR MANUFACTURING AND NANOTECHNOLOGY

The USEtox story: a survey of model developer visions and user requirements