The proliferation of artificial lighting at night is one of the key anthropogenic changes associated with urbanised areas as well as some non-urban areas. Disruption to natural light/dark regimes can have considerable effects on the timing of different behaviours of birds, particularly during the breeding season. However, the effect of artificial lights on the timing of behaviours during winter has received relatively little attention, despite the fact that time partitioning of foraging can have implications for avian winter survival. In this study, we assess at a landscape scale during winter, whether birds arrive at feeding stations earlier in areas with increased levels of artificial lighting using data from a citizen science project. Arrival times of the ten most commonly recorded species were associated with a combination of the density of artificial lights, temperature, rainfall and urban land cover. We found no evidence that birds advance the onset of foraging in gardens with more artificial lights nearby; contrary to our prediction, birds generally arrived later into these areas. This is possibly a response to differences in food availability or predation risk in areas with more artificial lights. We conclude that artificial light at night may not be as important for driving the timing of foraging behaviour in winter as previously thought, but it remains to be seen whether this represents a missed opportunity to extend the foraging period or an adaptive response. 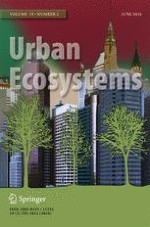 Demography of a ground nesting bird in an urban system: are populations self-sustaining?

Characteristics of atmospheric PM2.5 in stands and non-forest cover sites across urban-rural areas in Beijing, China

Composition, distribution and habitat effects of vascular plants on the vertical surfaces of an ancient city wall