Regeneration of zeolite using microwave heating has been investigated focusing on the removal of toluene by desorption from zeolite samples. Studies were focused on the effect of physicochemical characteristics of three types of zeolite namely Na-rich natural zeolite (clinoptilolite), synthesized and heat treated on the toluene desorption ratio. In this work, it was shown that, in case of synthesized zeolite an increasing number of pores and their diffusion rate on the surface of samples caused by the sintering process resulted in an increase in the adsorption capacity compared to natural and heat-treated samples. The desorption experiment was carried out in MW irradiation time for about 1 h in which the temperature of zeolites samples was raised to almost 400 °C. Moisture had a significant effect on the desorption characteristics of zeolites. Maximum desorption ratios were obtained after approximately 30 min for heat-treated and synthesized samples when the moisture content was adjusted to 20 % of sample weight. In general, among the samples used in this study, synthesized zeolite showed the greatest absorption capacity and most efficient desorption ratio. 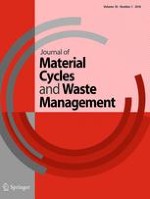 Waste prevention indicators and their implications from a life cycle perspective: a review