Metal oxide nanoparticles (NPs) are receiving increasing attention due to their increased industrial production and potential hazardous effect. The process of aggregation plays a key role in the fate of NPs in the environment and the resultant health risk. The aggregation of commercial titanium dioxide NP powder (25 nm) was investigated with various environmentally relevant solution chemistries containing different concentrations of monovalent (Na+, K+) and divalent (Ca2+) electrolytes. Titanium dioxide particle size increased with the increase in ion concentration. The stability of titanium dioxide also depended on the ionic composition. Titanium dioxide aggregated to a higher degree in the presence of divalent cations than monovalent ones. The attachment efficiency of NPs was constructed through aggregation kinetics data, from which the critical coagulation concentrations for the various electrolytes are determined (80, 19, and 1 meq/L for Na+, K+, and Ca2+, respectively). Our results suggest that titanium dioxide NP powders are relatively unstable in water and could easily be removed by adding multivalent cations so hazardous potentials decrease in aquatic environment. 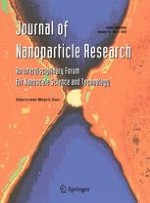 Electrokinetic motion of a rectangular nanoparticle in a nanochannel

Towards biosensing via fluorescent surface sites of nanoparticles