The effect of subsolvus forging temperature and strain rate on the grain size developed during final supersolvus heat treatment (SSHT) of two powder-metallurgy, gamma–gamma prime superalloys, IN-100 and LSHR, was established. For this purpose, isothermal, hot compression tests were performed at temperatures ranging from 1144 K (871 °C) and 22 K (22 °C) below the respective gamma-prime solvus temperatures (T γ′) and strain rates between 0.0003 and 10 s−1. Deformed samples were then heat treated 20 K (20 °C) above the solvus for 1 h with selected additional samples exposed for shorter and longer times. For both alloys, the grain size developed during SSHT was in the range of 15 to 30 μm, except for those processing conditions consisting of pre-deformation at the highest temperature, i.e., T γ′—22 K (T γ′—22 °C), and strain rates in the range of ~0.001 to 0.1 s−1. In these latter instances, the heat-treated grain size was approx. four times as large. The observations were interpreted in terms of the mechanisms of deformation during hot working and their effect on the driving forces for grain-boundary migration which controls the evolution of the gamma-grain size. 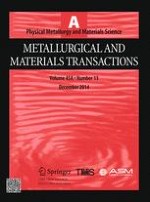 Precipitate Rafting in a Polycrystalline Superalloy During Compression Creep

A Study of the Development of Chemical Heterogeneity in Large Forging Ingots: Depending Upon the Configuration and Thermophysical Conditions of Casting