An experimental investigation was performed to analyze the effects of grain size on the quasi-static and dynamic behavior of Ti2AlC. High-density Ti2AlC samples of three different grain sizes were densified using Spark Plasma Sintering and Pressureless sintering. A servo-hydraulic testing machine equipped with a vertical split furnace, and SiC pushrods, was used for the quasi-static experiments. Also, a Split Hopkinson Pressure Bar (SHPB) apparatus and an induction coil heating system were used for the dynamic experiments. A series of experiments were conducted at temperatures ranging from 25 °C to 1100 °C for strain rates of 10−4 s−1 and 400 s−1. The results show that under quasi-static loading the specimens experience a brittle failure for temperatures below Brittle to Plastic Transition Temperature (BPTT) of 900–1000 °C and large deformation at temperatures above the BPTT. During dynamic experiments, the specimens exhibited brittle failure, with the failure transitioning from catastrophic failure at lower temperatures to graceful failure (softening while bearing load) at higher temperatures, and with the propensity for graceful failure increasing with increasing grain size. The compressive strengths of different grain sizes at a given temperature can be related to the grain length by a Hall-Petch type relation. 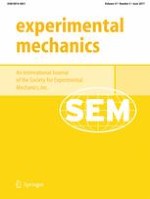 Stereo-DIC Calibration and Speckle Image Generator Based on FE Formulations