Decreasing the circuit dimensions is driving the need for low-k materials with a lower dielectric constant to reduce RC delay, crosstalk, and power consumption. In case of spin-on organosilicate low-k films, the incorporation of a porogen is regarded as the only foreseeable route to decrease dielectric constant of 2.2 or below by changing a packing density. In this study, methyltrimethoxysilane (MTMS)–bis(trimethoxysilyl)ethane (BTMSE) copolymers that had superior mechanical properties than MSSQ (methyl-silsesquioxane) were blended with amphiphilic block copolymers used as sacrificial pore generators. While adding up to 40 wt.% porogen into MTMS:BTMSE = 100:50 matrix, optical, electrical, and mechanical properties were measured and the pore structure was also characterized by positron annihilation lifetime spectroscopy (PALS). The result confirmed that there existed a tradeoff in attaining the low dielectric constant and desirable mechanical strength, and no more pores than necessary to achieve the dielectric objective should be incorporated. When the dielectric constant was fixed to approximately 2.3 by controlling BTMSE and porogen contents simultaneously, the thermo-mechanical properties of the porous films were also investigated for the comparison purpose. Under the same dielectric constant, the concurrent increase in BTMSE and porogen contents led to improvement in modulus measured by the nanoindentation technique but deterioration of adhesion strength obtained by the modified edge lift-off test. 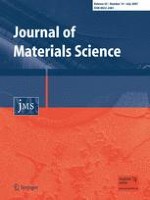