Semi-continuous emulsion polymerization of vinyl acetate and dioctyl maleate (VAc/DOM) (60/40, w/w) was carried out with pre-emulsion feeding using potassium persulfate as an initiator. The influence of emulsifier type and its initial ratio were studied and the mixture of non-ionic emulsifiers; 30 and 10 mol ethoxylated nonylphenol (NP30 and NP10) at a ratio of 50/50 (w/w) provided better pre-emulsion and polymerization stability, and also final latex stability. In addition, two series of experiments were conducted to determine the effect of initiator and reactive surfactant, oligomeric N-methylol acrylamide (o-NMA) amount in the initial reactor charge on the latex properties. By increasing the initial initiator amount from 10 to 50 wt%, the average particle size of the latexes decreased from 203 to 143 nm. As expected, the amount of initiator strongly affected the particle charge and the highest zeta potential value was obtained when 50 wt% of the initiator was initially present in the reactor, showing the increased latex stability. On the other hand, it was detected that the colloidal properties of the copolymer latexes were significantly affected by the change of initial charge of o-NMA. The o-NMA amount exceeding 50 wt% caused coagulation. When all o-NMA was initially fed, the highest viscosity value, 9878 cP; lowest zeta potential value, − 5 mV; and the highest surface tension value, 37.5 mN m−1, were obtained. Consequently, the change in the initial charge of emulsifier, initiator, and reactive surfactant has played an important role on the colloidal stability of VAc/DOM latexes. 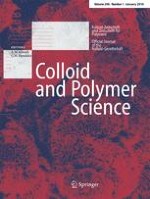 Synthesis and characterization of polyelectrolytes based on benzotriazole backbone

Fundamental properties, self-assembling behavior, and their temperature and salt responsivity of ionic amphiphilic diblock copolymer having poly(N-isopropylacrylamide) in aqueous solution