Gender and politics research argues that men are more hawkish and supportive of militarized confrontations with foreign foes, while women ostensibly prefer more diplomatic approaches. This suggests that, after a militarized confrontation with a foreign power, women’s likelihood of voting for the incumbent will both decrease and be lower than that of men. Our individual-level, cross-national examinations cover 87 elections in 40 countries, 1996–2011, and show only some support for such notions. Women punish incumbents when their country is targeted in a low-hostility militarized interstate dispute (MID) or when their country is the initiator of a high-hostility MID. The low-hostility MID initiation and high-hostility MID targeting scenarios, meanwhile, prompt women to be more likely to vote for the incumbent. Importantly, men’s reactions rarely differ from women’s, casting doubt on the existence of a gender gap in electoral responses to international conflict.
Anzeige
Vorheriger Artikel Correction to: Mass Media and Electoral Preferences During the 2016 US Presidential Race
Nächster Artikel Roadmaps to Representation: An Experimental Study of How Voter Education Tools Affect Citizen Decision Making 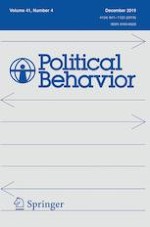 Does Partisan Self-interest Dictate Support for Election Reform? Experimental Evidence on the Willingness of Citizens to Alter the Costs of Voting for Electoral Gain

The Effects of Partisan Trespassing Strategies Across Candidate Sex