Recently, Fama and French ( 2015) introduced a five-factor asset pricing model that augments their three-factor model (Fama and French, 1993) by adding the profitability and investment factors. Fama and French ( 2015) have focused on the U.S. market, while Fama and French ( 2017) extend the analysis to a global reach, covering North America, Europe, and Asia Pacific. Country-specific studies, however, are rare, despite the fact that the results in Fama and French ( 2012), Fama and French ( 2017), and Griffin ( 2002) suggest that the global version of the factor asset pricing model is not overall convincing - and that local versions might provide further insights regarding relevant factors. Among previous country-specific studies are those by Daniel et al. ( 2001), who examine asset pricing anomalies in the Japanese stock market, and L’Her et al. ( 2004), who apply the Carhart ( 1997) four-factor model to the Canadian stock market. The Fama-French five-factor model has been tested on the Japanese market by Kubota and Takehara ( 2018) and on Australian data by Chiah et al. ( 2016).
However, to the best of our knowledge, a factor model that includes investment and profitability factors has not been implemented for the German stock market. We fill this gap by using recent monthly data of the CDAX constituents from 2002 to 2019 and analyze, whether there exists evidence for an investment or profitability premium. Subsequently, we incorporate these recently introduced factors within a factor model. Because our preliminary analysis hints at the existence of a momentum effect, we also include momentum as an additional factor and empirically examine the validity of the resulting six-factor model for the German stock market. This six-factor model is also considered by Fama and French ( 2017), when comparing nested factors models.
Anzeige
The German market has been previously studied by Ziegler et al. ( 2007), who apply the Fama-French three-factor model to the German equity market and cover a time period from 1968 to 1995. They conclude that the explanatory power of the three-factor model in Germany is not as high as in the U.S., however, it constitutes an improvement compared with a one-factor model. Schmidt et al. ( 2019) show within the context of a broad international study that the German equity market had a significant negative size premium between 1991 and 2012. Glaser and Weber ( 2003) analyse the momentum effect in the German market, and Hanauer et al. ( 2011) apply the Carhart four-factor model to the German equity market by relying on a sample covering the period 1996 until 2011. They summarize that the four-factor model yields a slight improvement over the three-factor model and that the factors for the German market show little correlation to other international studies. Artmann et al. ( 2012) conduct an analysis on the German equity market, covering the one-, three-, and four-factor model. They analyze the period from 1960 until 2006 and conclude that the results are sensitive to the construction and sorting procedures of the portfolios. The investment premium is studied extensively by Walkshaeusl and Lobe ( 2014), who use a large sample of countries, including Germany. Their results provide some evidence for an investment premium; however, this finding is mostly limited to small stocks.
The current paper proceeds as follows: Section 2 introduces the data, and Section 3 conducts preliminary analyses on potential profitability and investment premiums, including Fama-MacBeth regressions. Section 4 applies the three- and six-factor model to the German stock market, and Section 5 concludes the paper.

We rely on monthly returns of the CDAX constituents, covering a time period of 17 years, ranging from June 2002 to June 2019. The data are from the Bloomberg database. We follow previous asset pricing studies by Fama and French ( 2015), Ziegler et al. ( 2007), Hanauer et al. ( 2011), and Artmann et al. ( 2012) and exclude financials from our data base.
The CDAX includes all stocks traded on the Frankfurt Stock Exchange that are listed in the general standard or prime standard market segments. Portfolios sorted according to the factors outlined in the following sections are recalculated at the end of June every year. Only companies that have a positive book equity value are used. The total return comprises the price return of a stock and the reinvested dividend. When applying all the filters necessary to calculate all six factors, the average number of analyzed stocks excluding financials is 317, while the number of stocks never drops below 264. Details on our filters can be found in Table  12 in the appendix. The variables used for the construction of the profitability and investment measures and the corresponding Bloomberg codes are outlined in Appendix  1.
Anzeige
The smaller amount of available entities compared with the U.S. market leads to the adjustment of calculating 16 (4x4) value-weighted portfolios rather than 25 (5x5), as in Fama and French ( 2015). This corresponds to the previous studies of the German equity market by Artmann et al. ( 2012) and Hanauer et al. ( 2011).
The correlation of the returns of the adjusted investment universe with the CDAX returns amounts to 0.98. Consequently, we assume that our sample is representative of the overall German equity market. The basket of securities that remain in the sample after applying all filters constitutes the proxy for the market portfolio for our regressions. The risk-free rate is based on the one month EURIBOR rates.

4 Implementing a six-factor model for the German market

4.2 Empirical results for the three- and six-factor model

We implemented the Fama-French three- and a six-factor model by including profitability, investment, and momentum for the German market. Looking at the factors alone, the newly introduced profitability and investment factors do not show attractive, statistically significant returns on a long/short basis for the German equity market. The results from Fama-MacBeth regressions also show no evidence for an investment or a profitability premium. Comparing the results of the three-factor model with the results of the six-factor model for the German equity market, the improvement in explainability is rather marginal. The average adjusted \(R^{2}\) of the six-factor model increases only slightly compared with the three-factor model. We implement the six-factor model using portfolios double-sorted on size and value, investment, profitability, or momentum. We find that many of the regression intercepts for the RMW and CMA factors show strong statistical significance regardless of the left hand side sorting combination. Considering the GRS test statistics, we find evidence that the Fama-French six-factor model captures the cross-sectional return variation, when explaining size-valuation-sorted portfolio returns and, to a lesser extent, for size-operating profitability-sorted portfolios. Overall, the international evidence with respect to the significance of the newly introduced factors, operating profitability and investment, in explaining asset returns, is neither supported by our implementation of Fama-MacBeth regressions, nor by implementing a six-factor model for the German stock market.
Open Access This article is licensed under a Creative Commons Attribution 4.0 International License, which permits use, sharing, adaptation, distribution and reproduction in any medium or format, as long as you give appropriate credit to the original author(s) and the source, provide a link to the Creative Commons licence, and indicate if changes were made. The images or other third party material in this article are included in the article’s Creative Commons licence, unless indicated otherwise in a credit line to the material. If material is not included in the article’s Creative Commons licence and your intended use is not permitted by statutory regulation or exceeds the permitted use, you will need to obtain permission directly from the copyright holder. To view a copy of this licence, visit http://​creativecommons.​org/​licenses/​by/​4.​0/​.


Table 12
Sample selection filters. The table presents the filters applied for sample selection, starting with the CDAX constituents, filtering those constituents that are available on Bloomberg, excluding financials and filtering those companies with a positive book-to-market ratio, and those companies for which profitability and investment measures according to Fama and French (2015) can be calculated. The last column presents the final number of sample companies for which monthly prices are available
Table 13
Average monthly excess returns and the t‑statistic of the 3x3 triple-sorted portfolios for June 2002 until June 2019 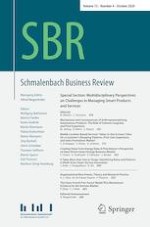 It Takes More than Two to Tango: Identifying Roles and Patterns in Multi-Actor Smart Service Innovation