China’s rise as a global power corresponded with a diminution of Taiwanese diplomacy, which has left Central America as the last region to host a continuous bloc of countries that recognize the ROC. In this article, we argue that China’s success in gaining diplomatic recognition from Taiwan’s former allies has largely resulted from China's economic policy, specifically its promises of large-scale infrastructure projects and the integration of Central American economies with Chinese markets. However, there are limits to how far China has advanced in gaining full recognition from the region. The competing political and economic interests of China, Taiwan, the United States, and the Central American countries themselves, continue to influence patterns of diplomatic switching. More specifically, we argue that the threat of punitive measures from the United States combined with a turn in Taiwanese diplomacy toward assistance efforts to combat Covid-19 may deter future switching in the short to medium-term. Our analysis offers case studies of four Central American countries (Costa Rica, Panama, El Salvador and Nicaragua) to illustrate the multi-year processes by which China’s economic strategy leads to diplomatic switching and examine the paths ahead for the remaining holdouts facing the prospect of economic and political penalties by the United States. 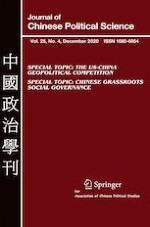 Oriana Skylar Mastro, The Costs of Conversation: Obstacles to Peace Talks in Wartime

A Community of Practice for Chinese NGOs

Ganging up on Trump? Sino-German Relations and the Problem with Soft Balancing against the USA