China has implemented a series of socioeconomic reforms since 1978. One of the reforms allows urban residents to purchase their own houses rather than renting houses from state institutions which has resulted in a rapid increase in home ownership. This paper estimates the impact of home ownership on life satisfaction in urban China on the basis of the 2010 wave of the China General Social Survey. Special attention is paid to the methodological problem of confoundedness between the determinants of home ownership and life satisfaction. Propensity score matching (PSM) is applied to control it. The results show that PSM reduces upward estimation bias caused by confoundedness and that it is more appropriate to control confoundedness than ordered probit regression. The estimates furthermore indicate that home ownership has a significant positive impact on life satisfaction of medium- and high income urban residents. For low income urban residents, the impact is also positive, though insignificant. The outcomes connect to the objectives of national development policy and thus have several important policy implications. First, the central and local governments, especially in provinces where it is still low, may want to continue stimulating home ownership as it enhances life satisfaction. Secondly, specific programs may be designed to make home ownership financially affordable for low income groups. Thirdly, local governments may want to initiate or intensify urban (renewal) programs to improve poor public facilities including public transportation, green space and sports accommodations in the immediate vicinity of depressing low income neighborhoods. 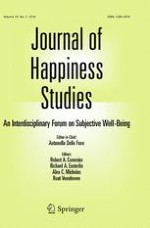 Do Envy and Compassion Pave the Way to Unhappiness? Social Preferences and Life Satisfaction in a Spanish City

Towards Youth Happiness and Mental Health in the United Arab Emirates: The Path of Character Strengths in a Multicultural Population

Strengths and Subjective Wellbeing in Adolescence: Strength-Based Parenting and the Moderating Effect of Mindset

The Best Possible Selves Intervention: A Review of the Literature to Evaluate Efficacy and Guide Future Research