Studies on cities in Europe and the United States have demonstrated that travel behaviour is influenced by urban form. Based on these findings policies steering the shape of cities have been proposed to reduce urban transport emissions and limit congestion. Such policies can also be relevant for the rapidly growing and motorising Chinese cities. Yet, empirical evidence on the relationships between urban form and car usage is scarce for the specific Chinese context that is characterised by high densities, fast development and strong government steering. Using novel crowd-sourced datasets we study the impact of several urban form variables (city size, urban density, land-use mix, polycentricity and spatial clustering) on the cost of commuting expressed in time and distance. The results show that city size and spatial clustering are important determinants of commuting: large cities without clear clusters of businesses and other facilities have longer average commuting times and distances. Increased prosperity also adds to longer and lengthier commutes. Spatial planning measures that maintain or reinforce high-density clusters can help limiting commuting distance and time. Current sprawled urban development may have long-term, negative consequences for the accessibility and liveability of Chinese cities and could hamper their economic potential. 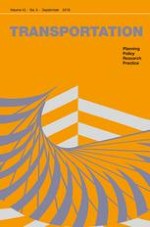 A practical method to estimate the benefits of improved road network reliability: an application to departing air passengers

The spatial dimensions of immobility in France

All minutes are not equal: travel time and the effects of congestion on commute satisfaction in Canadian cities