Current methods of mechanical excavation are limited by the rock strength and abrasivity on the one hand and by the machine size and capability of the tools on the other side.
Although blasting operation is the most economic for mass mining in the cyclic entry development in increasing depths in underground mines, it has severe disadvantages. Some of these are safety during blasting, need for time to ventilate the blast fumes, safety of storage, transport and handling of explosives, possible damage to entry profile; over-break and profile.
Anzeige
Beside research into improved drill & blast equipment and operation (e.g. mechanization and automation of the process [ 1]) there is a trend to search for continuous rock extraction methods like mechanical cutting.
There is a need for
When it comes to flexible advance also regarding the radius of the entry development for mechanical cutting, only the roadheader concept is flexible enough to cut turnoffs etc.
But the cutting tools of the roadheader have their limits concerning rock strength and abrasivity.
Anzeige
Despite in-depth research by several companies, like Element 6, Kennametal or Sandvik, in the last two decades the limit of usage has only been shifted higher very slightly. Presently it cannot be predicted if and when new materials like diamond composites will lead to a break-through with this type of tools.
Figure  1 gives a rough, simplified overview of the situation in 2016, comparing mechanical cutting systems in regard to the rock strength and the flexibility in proportion to turn off radii. It must be kept in mind that not all that is presently being developed by the OEMs of mining equipment is public and one can only hope for good results in R&D.
×
As there is a significant “Gap” for rock extraction in rock strength UCS higher than 150 MPa and flexibility in turn off radius <12 m, this is an important area for R&D at Montanuniversitaet Leoben and its partners.
The various existing methods shown in Fig.  1 are discussed in the following parts.

A roadheader is an excavation machine, mounted on tracks for mobility, with a boom mounted cutter head, a loading device which feeds into a conveyor. Today the cutter head for rock applications is fitted with pick tools. The lifetime of the present pick tools in higher rock strength and abrasivity is the major limiting factor for roadheader use in hard rock [ 2] – see Fig.  2.
×
But also the geometric configuration and the machine weight are of important influence [ 3] as shown in Fig.  3.
×
It is also essential to know that the cutting performance in m³/h is sinking with increasing UCS and abrasivity.
A roadheader can cut a 90° turnoff in entry development as long as the entry width is broad enough to allow the roadheader to manoeuvre (typically 6 to 8 m). For this reason the roadheader can swivel its cutter boom and rear conveyor in order to get around the corner.

Cemented tungsten carbide pick tools have reached a certain limit regarding the rock properties they can cut economically as shown in Fig.  2. In the last 15 years R&D in this type of tools has only yielded improvements in the range of a few percents.
Figure  4 shows the present classification for cemented carbide tools by Sandvik, who is one of the leading companies for this type of tools.
×
Therefore research into cutting tools using synthetic diamond based materials has been intensified in the last decade. Element 6 is leading the research in this area and offers long lasting tools with polycrystalline diamond tips (PCD) for use in coal mining (cf. Fig.  5).
×
During cutting tests PCD tools have performed well under stable cutting conditions for UCS up to 220 MPa, but as soon as there occurred irregularities in the guidance of the PCD tool they tended to disintegrate abruptly. It seems that they are not stable against pull or impact forces.
As on the other side PCD tools produce less dust and do not generate sparks in the UCS range <120 MPa, they fit perfectly for coal mining with touching the side stones sometimes for short periods.
But for hard rock with UCS >160 MPa the PCD pick tools need more R&D and it cannot be predicted if a breakthrough can be achieved in the near future.
Consequently, the performance of roadheaders in hard rock is limited by the available tools.

Atlas Copco developed the Mobile Miner, based on the concept of the Robbins Mobile Miner, tested at Broken Hill Mine in the 1990s. The new prototype was constructed for Rio Tinto in USA, but the test operation was cancelled because of the global crisis in commodity prices. Now it is scheduled to go to Anglo America as Rapid Mine Development System in the Twickenham Platinum Mine in South Africa [ 12]. The tests commenced at the end of 2016, yielding promising results (Fig.  9,  10).
×
×
So the Atlas Copco Mobile Miner as built today has a turning radius of 65 m, and practical operation will show the upper economical limit in regard to cuttable rock strength. A big advantage is that the results of the Robins Mobile Miner operation in Broken Hill in the 1990s were taken into consideration.

Caterpillar developed the Caterpillar Rock Straight System, which is a longwall mining system for reef mining [ 13], (Fig.  11). It is also understood that a similar cutting system for use on a roadheader is under development, but no official data available so far.
×
The Rock Straight System is designed for reef mining in abrasive material and is therefore not suitable for the development of roadways. From the cutter head design it will be interesting to see the size of the cut material and the tear and wear for rock with UCS >150 MPa.

Joy Mining and CRC Mining have been working together since 2006 with the oscillating disc cutter called DynaCut™ and have also done tests with 80 MPa waterjets to support the cutting process [ 14], (Fig.  12). The Joy Global DynaCut machine is scheduled to go for a test site in 2016 [ 15].
×
The roadheader concept gives this system a high flexibility. But the application of a single oscillating cutting disc raises questions regarding the amount of extracted material per hour. In road development the question how to achieve the undercut free space to start is not solved. It will be interesting to see the results of the planned tests in this regard.

The Cutting Technology for rock at the location Zeltweg in Austria looks back on a long history. In the late 1950s the Wohlmeyer undercutting machine was developed and brought into operation there [ 16], (Fig.  13,  14).
×
×
Around 2004, Sandvik Mining and Construction developed the Reef Miner ARM 1100, which was operationally tested in the abrasive platinum reef in South Africa and in copper mining in Poland. In the beginning, the lifetime of the cutter discs was a limiting factor. ARM1100 is designed for following the reef, so the flexibility is low and the cutting discs are built to withstand a high abrasivity and rock strength >200 MPa.
For Rapid Mine Development the Sandvik MX650 with roller disc undercutting technology is built and scheduled to be tested at the tungsten mine in Mittersill in 2017. The machine seems to be stabilized by grippers to handle the cutting reaction forces. The minimum turn off radius for this system is expected to be 12 m and rock strength up to 250 MPa is in the focus (Fig.  15).
× 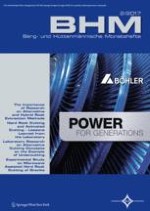 Laboratory Research on Alternative Cutting Concepts on the Example of Undercutting