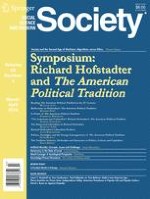 The Dialectical Liberalism of Richard Hofstadter

In Praise of The American Political Tradition

A Divided World in Entropy

Society and the Second Age of Machines: Algorithms Versus Ethics