The Influences of Carbon and Molybdenum on the Progress of Liquid Phase Sintering and the Microstructure of Boron-Containing Powder Metallurgy Steel | springerprofessional.de Skip to main content
TOOLBAR 1 2 3 4
SUCHE MENÜ 1 2 3 4

Boron is an optimal alloying element for liquid phase sintering (LPS) of powder metallurgy (PM) Fe-based materials. However, the influences of various alloying elements on the progress of LPS are still undetermined. The aim of this study was to clarify the effects of carbon and molybdenum on the LPS and microstructure of boron-containing PM steel. The results showed that adding 0.5 wt pct C and 1.5 wt pct Mo, and particularly the former, promotes the LPS and increases the sintered density. With the addition of 0.5 wt pct C, liquid can be generated in two distinct regions, and the secondary liquid improves the densification. After 1523 K (1250 °C) sintering, the increases in sintered densities of Fe-0.4B, Fe-0.4B-1.5Mo, Fe-0.4B-0.5C, and Fe-0.4B-1.5Mo-0.5C steels were 0.33, 0.47, 0.56, and 0.64 g/cm3, respectively. Thermodynamic simulation also demonstrated that the increases in sintered densities were correlated with the liquid volumes formed at 1523 K (1250 °C). In conclusion, adding 0.5 wt pct C to B-containing PM steels facilitates the formation of a secondary liquid phase and higher liquid volume, resulting in better densification.

Titel
The Influences of Carbon and Molybdenum on the Progress of Liquid Phase Sintering and the Microstructure of Boron-Containing Powder Metallurgy Steel
Autor:
Ming-Wei Wu 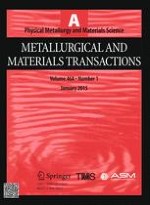 Symposium: Materials and Fuels for the Current and Advanced Nuclear Reactors II

In Situ Synchrotron Radiation Study of TiH2-6Al-4V and Ti-6Al-4V: Accelerated Alloying and Phase Transformation, and Formation of an Oxygen-Enriched Ti4Fe2O Phase in TiH2-6Al-4V