What role does government play in the provision of public goods? Economists have used the lighthouse as an empirical example to illustrate the extent to which the private provision of public goods is possible. This inquiry, however, has neglected the private provision of lightships. We investigate the private operation of the world’s first modern lightship, established in 1731 on the banks of the Thames estuary going in and out of London. First, we show that the Nore lightship was able to operate profitably and without government enforcement in the collection of payments for lighting services. Second, we show how private efforts to build lightships were crowded out by Trinity House, the public authority responsible for establishing and maintaining lighthouses in England and Wales. By including lightships into the broader lighthouse market, we argue that the provision of lighting services exemplifies not a market failure, but a government failure. 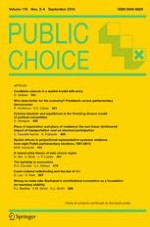 Place of registration and place of residence: the non-linear detrimental impact of transportation cost on electoral participation

Correction to: Policy-specific alienation and indifference in the calculus of voting: a simultaneous model of party choice and abstention

Money as meta-rule: Buchanan’s constitutional economics as a foundation for monetary stability