Masks save lives. Therefore, while the culture of wearing masks is promoted, it is critical to understand the various aspects of how that culture is adopted. The main contribution of this paper is in the modeling of the mask game. Wearing a mask provides partial protection against epidemics at some cost of comfort. Players can be differentiated according to both their risk state as well as their health state (susceptible, infected and removed). We formulate the problem as a Bayesian game in which players know their own risk state and ignore their own health state and the health and risk states of their counterparts. Using ideas from evolutionary games, we reduce the problem to a one-shot equivalent game and describe the structure of the symmetric equilibria. We prove that the policies adopted by the players at such equilibria admit a threshold structure. More specifically, players wear masks only if their risk state is equal to or bigger than a given threshold.
Anzeige
Vorheriger Artikel Game-Theoretical Model of the Voluntary Use of Insect Repellents to Prevent Zika Fever
Nächster Artikel COVID-19 and Stigma: Evolution of Self-restraint Behavior 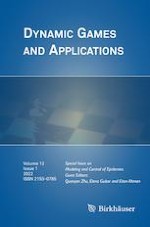 Dynamic Games of Social Distancing During an Epidemic: Analysis of Asymmetric Solutions