This paper tests the existence of a Beveridge Curve across the economies of nineteen OECD countries from 1980 to 2007, investigating the impact of technological progress and globalisation on the unemployment-vacancies trade-off. We find largely favourable evidence for the existence of a OECD Beveridge Curve. Lagged values of technological progress (R&D intensity) shift the Curve outwards, producing evidence in support of the creative destruction effect. Lagged values of a globalisation index also shift the Curve outwards, worsening the unemployment-vacancies trade-off. On the other hand, capital per worker shifts the Curve inwards both in the short and in the long run. Significant institutional variables include coordination bargaining, and, less consistently, unemployment benefits or employment protection. Including in the Curve structural indicators (such as technological progress and globalisation) as well as institutional variables is needed to obtain a satisfactory specification. 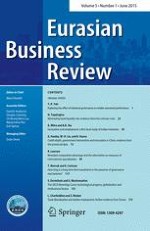 How long is a long-term-firm investment in the presence of governance mechanisms?

Innovation and employment: a firm level study of Indian industries

Credit depth, government intervention and innovation in China: evidence from the provincial data

Revealed comparative advantage and the alternatives as measures of international specialization