Near ambient-pressure X-ray photoelectron spectroscopy (NAP-XPS) is used to study the chemical state of methane oxidation catalysts in-situ. Al2O3–supported Pd catalysts are prepared with different particle sizes ranging from 4 to 10 nm. These catalysts were exposed to conditions similar to those used in the partial oxidation of methane (POM) to syn-gas and simultaneously monitored by NAP-XPS and mass spectrometry. NAP-XPS data show changes in the oxidation state of the palladium as the temperature increases, from metallic Pd0 to PdO, and back to Pd0. Mass spectrometry shows an increase in CO production whilst the Pd is in the oxide phase, and the metal is reduced back under presence of newly formed H2. A particle size effect is observed, such that CH4 conversion starts at lower temperatures with larger sized particles from 6 to 10 nm. We find that all nanoparticles begin CH4 conversion at lower temperatures than polycrystalline Pd foil. 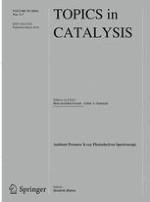