Concentrated solutions of nearly monodisperse poly(methyl methacrylate), PMMA-270k and PMMA-86k, in oligo(methyl methacrylate), MMA o-4k and MMA o-2k, investigated by Wingstrand et al. (Phys Rev Lett 115:078302, 2015) and Wingstrand (2015) do not follow the linear-viscoelastic scaling relations of monodisperse polystyrenes (PS) dissolved in oligomeric styrene (Wagner in Rheol Acta 53:765–777, 2014a, in Non-Newtonian Fluid Mech 222:121–131, 2014b; Wagner et al. in J Rheol 59:1113–1130, 2015). Rather, PMMA-270k shows an attractive interaction with MMA, in contrast to the interaction of PMMA-86k and MMA. This different behavior can be traced back to different tacticities of the two polymers. The attractive interaction of PMMA-270k with o-4k creates pseudo entanglements, which increase the interchain tube pressure, and therefore, the solution PMMA-270k/o-4k shows, as reported by Wingstrand et al. (Phys Rev Lett 115:078302, 2015), qualitatively a similar scaling of the elongational viscosity with \( {\left(\dot{\varepsilon}{\tau}_R\right)}^{-1/2} \) as observed for polystyrene melts. For the solution PMMA-270/o-2k, this effect is only seen at the highest elongation rates investigated. The elongational viscosity of PMMA-86k dissolved in oligomeric MMA is determined by the Rouse time of the melt, as in the case of polystyrene solutions.
× 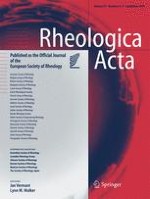 Flow past a rotating sphere in a Bingham plastic fluid, up to a Reynolds number of 10,000