We constructed a single-relay-station cooperative communications system, featuring integration between the dynamic decode-and-forward (DDF) protocol and network coding (NC) to examine the outage probabilities in the Rayleigh, Rician, and Nakagami fading channels. In addition, the diversity-multiplexing tradeoff of the system was analyzed to examine improvements for system performance through integrating these two technologies. Through simulations and analyses, we discovered that the systems featuring NC had lower outage probability and greater diversity gain, and consequently, greater system reliability compared to the ordinary system featuring only the DDF protocol. However, because we added a final phase for the transmission of network coded signals, the system showed lower multiplexing gain compared to the system featuring only the DDF. Users should adopt this system based on their needs. For example, in situations that have higher requirements for reliability and lower requirements for multiplexing gain, users can adopt a DDF-NC cooperative communications system. 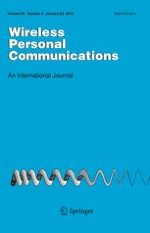 Mobile IMS Integration of the Internet of Things in Ecosystem