» Jetzt Zugang zum Volltext erhalten
Wichtige Hinweise
A preliminary version of this article appeared in the proceedings of the Third International Symposium on Algorithmic Game Theory (SAGT), 2010.
Most of the work on the paper has been done while Jan Christoph Schlegel was a student at ETH Zurich.

We study the price of anarchy and the structure of equilibria in network creation games. A network creation game is played by n players {1,2,…,n}, each identified with a vertex of a graph (network), where the strategy of player i, i=1,…,n, is to build some edges adjacent to i. The cost of building an edge is α>0, a fixed parameter of the game. The goal of every player is to minimize its creation cost plus its usage cost. The creation cost of player i is α times the number of built edges. In the SumGame variant, the usage cost of player i is the sum of distances from i to every node of the resulting graph. In the MaxGame variant, the usage cost is the eccentricity of i in the resulting graph of the game. In this paper we improve previously known bounds on the price of anarchy of the game (of both variants) for various ranges of α, and give new insights into the structure of equilibria for various values of α. The two main results of the paper show that for α>273⋅n all equilibria in SumGame are trees and thus the price of anarchy is constant, and that for α>129 all equilibria in MaxGame are trees and the price of anarchy is constant. For SumGame this answers (almost completely) one of the fundamental open problems in the field—is price of anarchy of the network creation game constant for all values of α?—in an affirmative way, up to a tiny range of α. 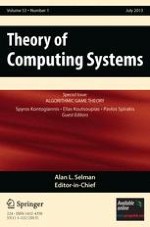 On the Rate of Convergence of Fictitious Play

Braess’s Paradox for Flows over Time

On the Structure of Weakly Acyclic Games