The objective of this study was to investigate the influence of molecular structure on impact resistance (a n) and bending strength (σ) of photocured urethane-dimethacrylate polymer networks. Urethane-dimethacrylate (UDMA) monomers were synthesized through reaction of oligoethylene glycol monomethacrylate (OEGMMA) with diisocyanate (DI). OEGMMA varied within the length of the oligooxyethylene chain, which consisted of one to four oxyethylene units. DI varied in chemical character: aliphatic, cycloaliphatic or aromatic. The molecular structure of UDMA polymers was characterized by X-ray powder diffraction, which allowed the calculation of the d-spacing (d) and dimensions of microgel agglomerates (D). The measurements of the polymerization shrinkage were used for the determination of the degree of conversion (DC), whereas the concentration of double bonds was used as a measure of the crosslink density (q). It was found that all structural parameters depend on the UDMA chemical structure. The increasing length of the oligooxyethylene chains caused the decrease in d and q, in contrast to the increase in D and DC. The DI chemical character caused the increase in the DC and q accordingly: symmetrical cycloaliphatic or aromatic < asymmetrical cycloaliphatic and aromatic < substituted aliphatic < linear aliphatic. The compact packing and high DC in polymers derived from aliphatic DIs gave rise to the decrease in d and the increase in D. The non-planar conformation of cycloaliphatic DIs emerged in high d as well as D. The planar conformation of aromatic DIs resulted in the decrease in d as well as D. The study indicated that mechanical behavior of UDMA polymer networks can be explained in terms of the structural parameters. DC and q appeared to be the main factors determining both mechanical properties of poly(UDMA)s. The a n was also shown to be affected by d. Particularly high linear correlations were found on a semi-logarithmic scale for the DC and d with a n. a n increased as the DC increased, whereas d decreased. 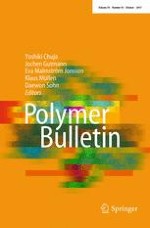 Synthesis of epoxide functionalized hyperbranched polyurethane and its blending with benzoxazine: cure kinetics and thermal properties