The structure of the wake generated by a submarine model in yaw | springerprofessional.de Skip to main content
TOOLBAR 1 2 3 4
SUCHE MENÜ 1 2 3 4

The turbulent wake of a submarine model in yaw was investigated using stereoscopic particle image velocimetry at \(Re_{L} = 2.4 \times 10^{6}.\) The model (DARPA SUBOFF idealized submarine geometry) is mounted in a low-speed wind tunnel using a support that mimics the sail, and it is yawed so that the body moves in the plane normal to the support. The measurements reveal the formation of a pair of streamwise vortices that are asymmetric in strength. The weaker vortex quickly diffuses, and in the absence of further diffusion, the stronger vortex maintains its strength even at the furthest downstream location. It is suggested that the flow fields obtained here using a semi-infinite sail as a support will be similar to those obtained using a finite length sail since its tip vortex would not interact significantly with the body vortices present in the wake, at least for a considerable distance downstream of the stern \((x/D > 24).\) Hence, a submarine in yaw is expected to generate wakes which are inherently more persistent than one in pitch, and the strong asymmetries in yaw are expected to produce a net rolling moment on the body.

Titel
The structure of the wake generated by a submarine model in yaw
Autoren:
A. Ashok
T. Van Buren
A. J. Smits 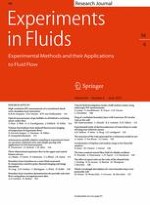 Three-dimensional inspiratory flow in the upper and central human airways