Ethicalisation processes that partake in the construction of a firm or a professional group’s ethical identity are often described as a relatively linear combination of several components, such as policies (starting with the development of a code of ethics), corporate practices, and leadership. Our study of a professional community dealing with the topics related to cultural diversity indicates a more reciprocal relationship between ethical identity and ethicalisation processes. We argue that a tangible form of ethical identity can pre-date the ethicalisation process of a professional group, and additionally, can impact this process at the start. We highlight that, despite the absence of official ethical statements in the community, a form of ethical professional identity is already present among the interculturalists of the international organisation Society for Intercultural Education Training and Research. Using critical discourse analysis, we identify the proclaimed humanist ethos in the discourses that interculturalists co-produce and diffuse during conferences, on on-line discussion forums, and in the mission of their professional organisations. This study contributes to the literature on ethical identity development by showing how a pre-existing form of ethical identity can influence the early stage of the development of a code of ethics. In addition, we indicate that, similar to organisational identity construction, ethical identity construction uses self-other identity talks, thus, defining an ethical other (or less ethical other) in its development. 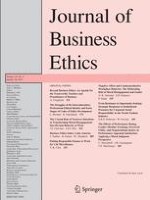 From Resistance to Opportunity-Seeking: Strategic Responses to Institutional Pressures for Corporate Social Responsibility in the Nordic Fashion Industry

Beyond Business Ethics: An Agenda for the Trustworthy Teachers and Practitioners of Business

The Role of Ethics in the Commercialization of Indigenous Knowledge