Considerable efforts have been made to estimate the relationship between energy and non-energy inputs in the production process. However, it remains controversial whether energy and non-energy inputs are complements or substitutes. Empirical analysis is conflicting on this issue. This study seeks to explore an alternative way to explain these conflicting results by examining the issue from the perspective of energy efficiency. This study is based on time series data for capital, labor, and energy from 28 Chinese provinces, covering 1985 to 2012. The results show that capital and energy are substitutes in all of the provinces, whereas labor and energy are complements in most of the provinces. Using the threshold effect model, we discover evidence of a threshold point based on the amount of energy efficiency activity in a province. This point separates the substitution behavior of provinces between energy and non-energy inputs. Low-energy efficiency provinces do not substitute as readily as high-energy efficiency provinces. The findings imply that the energy-saving technologies should be applied in provinces with comparatively higher energy intensity because they have more energy conservation potential.

Titel
The threshold effects of energy efficiency on the elasticity of substitution between energy and non-energy factors
Autoren:
Donglan Zha
Jinjin He 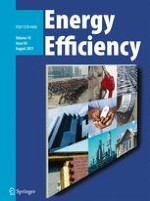 A hybrid method of LMDI, symmetrical components, and SFA to estimate the distribution of energy-saving potential with consideration of unbalanced components in decomposition analysis

Drivers for energy efficiency and their effect on barriers: empirical evidence from Italian manufacturing enterprises

On the investigation of energy saving aspects of commercial lifts