Significant research effort has already been invested in the field of robot-assisted therapy for children with developmental disorders, and the researchers generally agree that therapists should be involved in the development of assistive robotic tools. However, relatively little attention has been devoted to robots’ capacity to autonomously engage in a natural language dialogue in the context of robot-assisted therapy. This paper focuses on this desideratum. It introduces a programming platform that enables the therapist to design a robot’s dialogue behavior. To the extent that the platform is domain-independent, it enables the therapist to flexibly model (1) the interaction domain and the lexicon, (2) the interaction context, and (3) the robot’s dialogue strategy. To the extent that the platform is therapist-centered, it is motivated by real-life difficulties that therapists encounter while trying to specify a robot’s dialogue behavior and can be used by nontechnical therapists in a user-friendly and intuitive manner. In addition, the platform (4) enables the therapist to test dialogue strategies independently of therapeutic settings, and (5) provides estimated cognitive load placed on the child while trying to process the therapist’s dialogue acts. 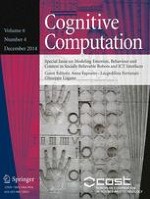 Approaching Social Robots Through Playfulness and Doing-It-Yourself: Children in Action

Exaggerating Facial Expressions: A Way to Intensify Emotion or a Way to the Uncanny Valley?

Detection of Deception Via Handwriting Behaviors Using a Computerized Tool: Toward an Evaluation of Malingering